Following the success of legalized possession and cultivation in 2018, another major victory was celebrated in October 2020 when the bill to regulate and tax cannabis sales in Vermont became law. This made Vermont the 11th state to regulate adult-use sales while being the second state to do so legislatively instead of a voter initiative.

Retail sales are expected to begin in Fall 2022, but some are concerned that delays are inevitable.

18 YEARS IN THE MAKING

Like most adult-use regulated states, Vermont began its liberation from prohibition in May 2004 when then Governor James Douglas passed Senate Bill 76, legalizing medical cannabis. This law was further expanded in June 2007 when Senate Bill 7 expanded the state’s medical law. Both laws passed without the Governor’s backing.

In June 2013, Governor Peter Shumlin signed House Bill 200, eliminating criminal penalties for possession by an adult of one ounce or less with the aim to refocus the state’s law enforcement resources into cracking down on opiates such as heroin and meth. Then, in early 2014, Vermont took legalization plans into consideration with the support of Governor Shumlin for a tax-and-regulate system.

Real legalization efforts were seen 3 years after in May 2017, when the Vermont House approved a bill to allow personal possession, use and cultivation but not commercial sales. On the other hand, the Vermont State approved a broader bill in April 2017, allowing commercial sale. S.22, a joint bill formerly concerning fentanyl was amended to legalize cannabis, approved by the entire state legislature for the first time in US history. However, the bill was vetoed by Governor Phil Scott and sent it back to legislature for changes.

Hope was reinvigorated in January 2018 when Gov. Scott signed H.511, a bill legalizing possession and limited cultivation by adults 21 and older. The bill took effect on July 2019. This was the first time any state legislature legalized adult use cannabis through the legislative process rather than by a vote of the people. However, the 2018 act had no sales or revenue provisions.

The legislature failed to create a tax-and-regulate system in the 2018 session. With the passing of S. 54 in October 2020, regulated sales had entered into law. The act, known as Act 164 (2020), sets the following timeline for the roll-out of the adult-use market:

A report by Vermont’s Cannabis Control Board (CCB) in 2021 estimated that the state’s new adult-use market will top $220 million in annual sales by 2024. However, a CCB-backed analysis also showed that the market could experience a slow start, beginning with supply issues during the first year of retail sales.

In a report to the Legislature, the CCB proposed that Vermont’s adult-use program should focus on smaller operators – An idea to make the new recreational market accessible to individuals who have operated in the state’s legacy market. Although the CCB’s recommendation was to focus on small operators, it might impact the state’s tight deadline on rules, license issuance, growing and sales launch. 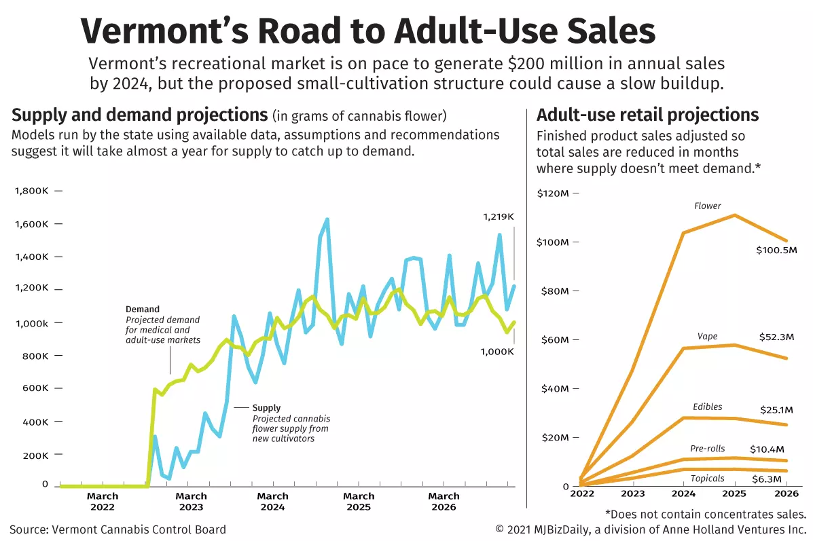 According to the CCB, Vermont projects adult-use retail sales to be $10 million by the end of 2022 and will begin to ramp up in 2023, reaching $103 million in sales and then doubling in 2024 to about $220 million. From then on, sales are expected to plateau.

To date, the CCB has received 208 license applications. Under state law, existing medical marijuana dispensaries were supposed to be first to sell adult-use products on May 1. However, the CCB missed its deadline for issuing retail licenses, as reported by Burlington Free Press. The slow rollout was due to the lack of staffing, on top of the state’s governor did not appoint the CCB members until late March 2022.

According to the Vermont Growers Association, this House amendment will place Vermont’s entire adult-use marketplace in jeopardy, introduce significant and unprecedented risk, and, in turn, impact countless local businesses and consumers, the state’s projected revenue, and keep cannabis products unregulated.

Vermont is still the only state with THC caps with an active adult-use market, with Connecticut just passing them. Contrary to the misleading testimony offered by prohibitionists in the House Committee on Government Operations, there is no national trend to prohibit high-THC products in the 18 states with adult-use cannabis markets.

Vermont’s neighboring states and likely competitors for legal cannabis, such as New York and Massachusetts, will offer more desirable regulated cannabis products that Vermont will be prohibited from offering if the bill gets enacted.