It has been a full decade since Colorado became the first state in the national to legalize recreational use along with Washington. Today, the market has grown to 37 states with medical cannabis programs and 19 that have legalized adult-use cannabis. The industry will witness yet another step forward when the midterm election comes. The decision will show if these five states: Arkansas, Maryland, Missouri, North Dakota, and South Dakota would want to legalize adult-use.

Cannabis revenue has grown consistently since Colorado began its legal cannabis sales back in 2014. Industry experts initially believed that business will unlikely slow down from the early pandemic record-breaking dispensary sales. However, market oversaturation and inflation has slowed down businesses since the Summer 2022, with uncertainties looming in the Centennial State.

Colorado’s journey towards being the first 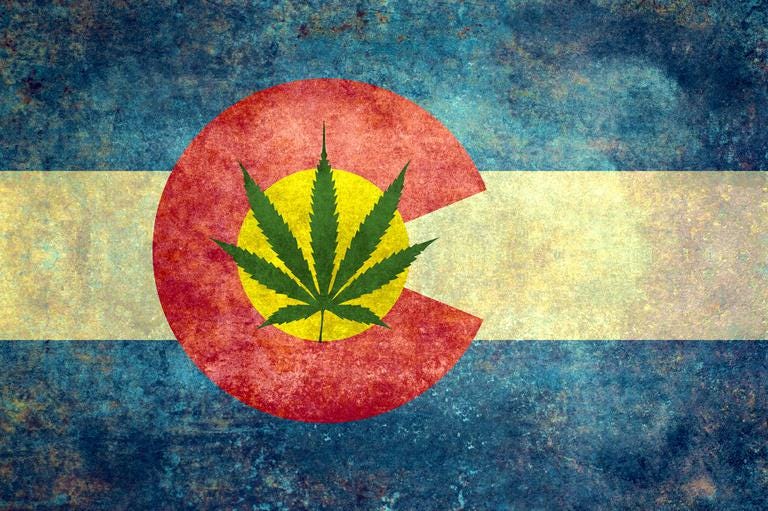 Colorado became the first state in the world to end cannabis prohibition on November 6th, 2012. State voters passed Amendment 64 with the help of the Sensible Colorado, Marijuana Policy Project and a dozen of other attorneys. A64 legalized adults aged 21 or older to possess up to one ounce and grow up to six plants. It also provides for licensing of cultivation, product manufacturing, testing and retail stores. This amendment also requires the general assembly to enact an excise tax upon wholesale sales. The first $40 million in revenue raised annually through such tax will contribute to a public school capital construction assistance fund, known as the Building Excellent Schools today (B.E.S.T.) program.

2014 marked the first year of Colorado’s implementation of Amendment 64. Both Colorado’s medical and recreational market reached a total of $700 million in sales. On February 2015, Colorado’s tax collection from the first year of legal commercial sales reached a total of $44 million. A further $32 million was collected from fees on the industry and pre-existing taxes on medical marijuana. The state Department of Revenue reported that recreational and medical dispensary sales reached over $996 million in 2015. It was a $297 million increase from the $699 million sold in 2014. The 2015 sales generated $135 million of tax revenue, $35 million of which are being used for the Education Center construction projects.

Colorado’s legal cannabis industry has become an economic heavyweight with 900 retail businesses in operation powered by 40,000 employees. Sales since the first recreational sales began in 2014 have totaled to more than $13.4 billion. The Centennial State has collected $2.3 billion in state tax revenue. Most of the revenue went to education and additionally supported affordable housing, substance abuse and treatment, law enforcement and agriculture.

In 2020, amid the pandemic, consumers were spending more which contributed a record-breaking combined sales of $225.4 million in July 2020. Sales peaked for Colorado in 2021 as annual sales managed to hit $2.2 billion. 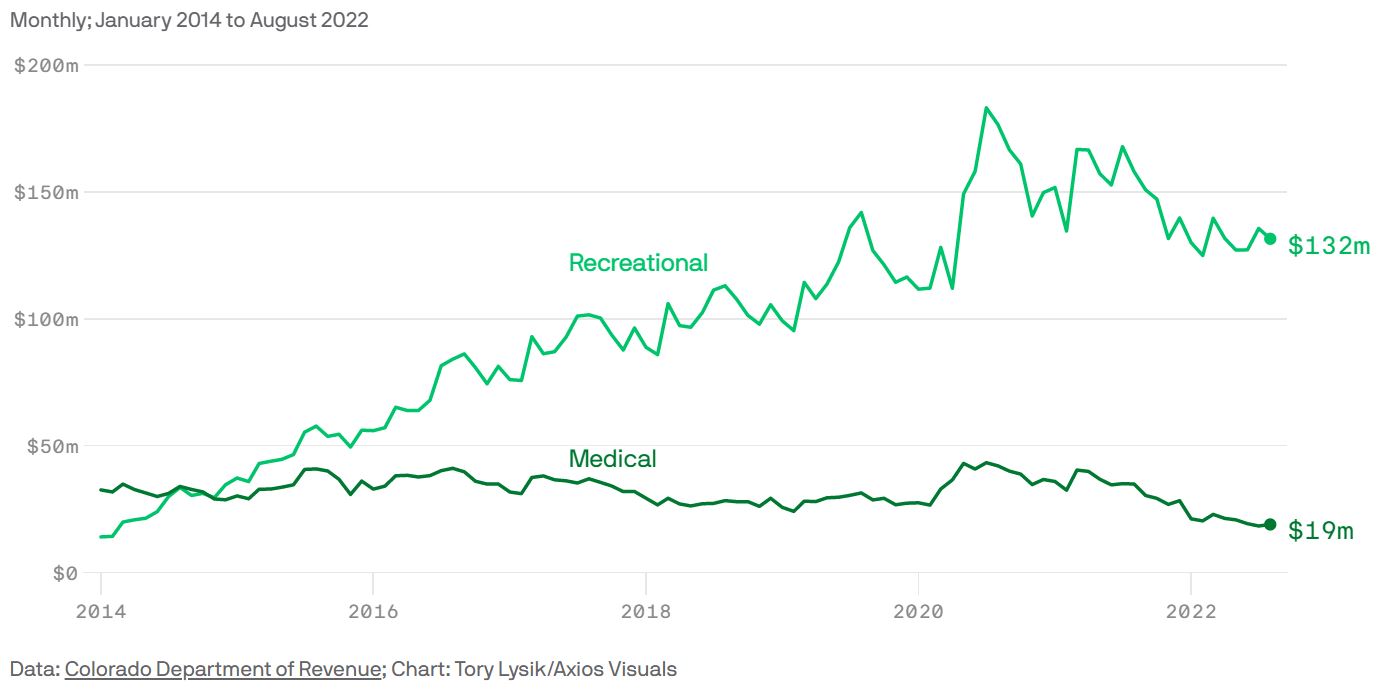 Colorado’s cannabis market is experiencing a prolonged downturn in 2022. The mid-2022 saw the fourth consecutive quarter of declining sales, an inverse of the record-breaking revenues from the early days of the pandemic. Total sales in Colorado only reached $150.4 million in August 2022, a 2.2% decline from July. The medical and retail sectors have experienced nearly identical downturns. July’s medical marijuana sales reached a little more than $18 million, but it was the lowest monthly number since January 2014.

The industry faces its first real crisis after the first half of 2022. Sales and wholesale prices have gone down and supply-and-demand crunch led to significant retail closures and layoffs. Marijuana retail sales in Colorado were down 22% in June 2022, compared to the previous year. Wholesale price of cannabis flower fell to an all-time low: A 46% decrease to $709 a pound (Record price in January 2015 – $2,007). 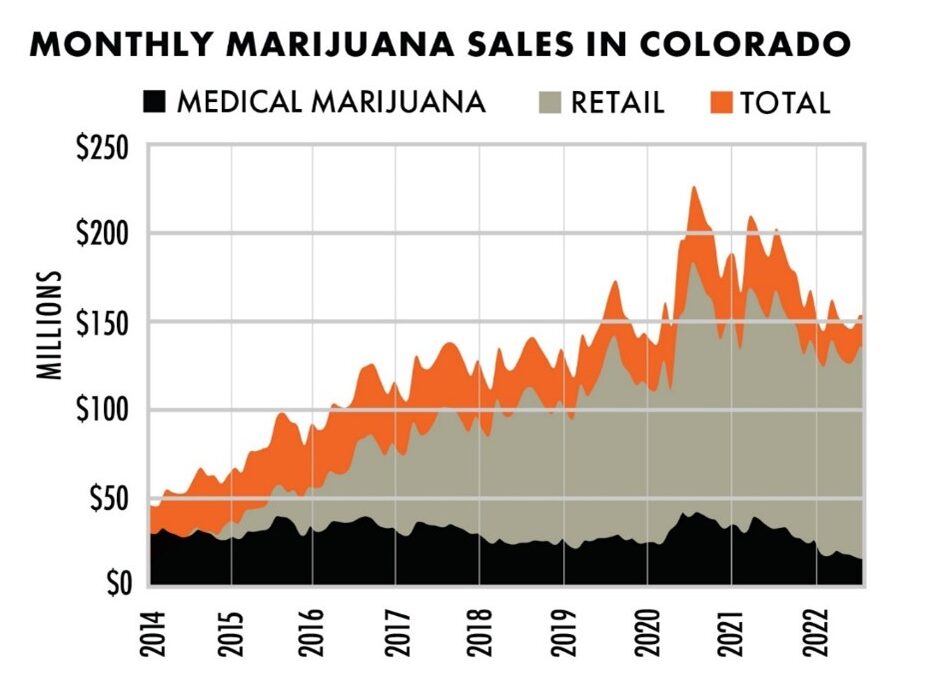 After the pandemic, there is a broader rebalancing of consumer spending and time. The added concerns about the rising cost of good due to inflation have contributed to the downturn. Nine more states have legalized recreational cannabis during the past two years, affecting Colorado’s cannabis tourism trade. The addition of New Mexico in 2021 indirectly caused a 40% to 50% drop in Colorado’s southern border towns sales. If the 2022 midterm elections see Arkansas, Maryland, Missouri, North Dakota, and South Dakota legalize recreational use, the effect would be more apparent.

Subsequently, sales tax revenue figures continue the downward slide. In 2021, tax and fee revenue were $423.5 million, compared to the current total through September of $251.7 million. Similarly, annual sales totals are also down to $1.2 billion through August of this year. In 2021, sales reached $2.2 billion for the full year. According to a reporting by The Denver Gazette, the decrease in both medical sales and tax revenue could be from the passing of HB21-1317. The bill limits the amount of medical cannabis sales from 40 grams to 8 grams.

Industry Analyst: It is the course of nature

According to cannabis data company BDSA, mature adult-use markets such as Colorado will experience “the most dramatic sales declines” while newer markets spurring sales. The medical sales are on a downward trend because “patients have access to increasing variety and lower prices in neighboring adult-use markets.” However, this does not mean that the market as a whole is not poised for growth.

According to BDSA’s rolling market forecast, both the U.S. and global cannabis sales are on track for growth. In 2026, annual sales worldwide are estimated to increase to $57 billion from the $30 billion from 2021. The U.S. market is forecasted to surge to $42 billion form 2021’s $25 billion. The nation’s legal sales in 2022 will reach $27 billion – a 7% boost over the previous year’s sales.

Still lots of work to do

The first step of ending cannabis prohibition was made a decade ago. Now, it is time for states to work on social equity and repairing the historical damage caused by prohibition. Several states have enacted programs but many have struggled to produce wide-scale, long-term gains.

Regulators in Denver is partnering with the Color of Cannabis, a Denver-based education company, to run the program for social equity licensees. Color of Cannabis includes a 10-week program with sessions on the regulatory structure of the industry, how to use the seed-to-sale tracking software METRC and advice on navigating legal and funding issues unique to marijuana.

Centennial State is showing signs of progress. Denver’s marijuana regulator will soon introduce legislation to address some of the issues hampering the program. The measure would bar dispensaries from ferrying cannabis themselves entirely and slash licensing fees for setting up delivery businesses.